SISU Polar Super truck combines the proven technology of SISU Polar product range and the special requirements set by the industry. The improved performance necessary in the challenging mine environment is based on the purpose-built and robust frame and suspension structure, as well as the task-specific Fliegl push-off body, which keeps the centre of gravity low during the transport and unloading, and allows the operation in low building environment, too. Otherwise the truck utilises the same technology basis as the rest of the Sisu Polar range. Thereby, economy and serviceability of the truck in question are optimal.

Pay-loads of up to 50 tons in varying operational environment. 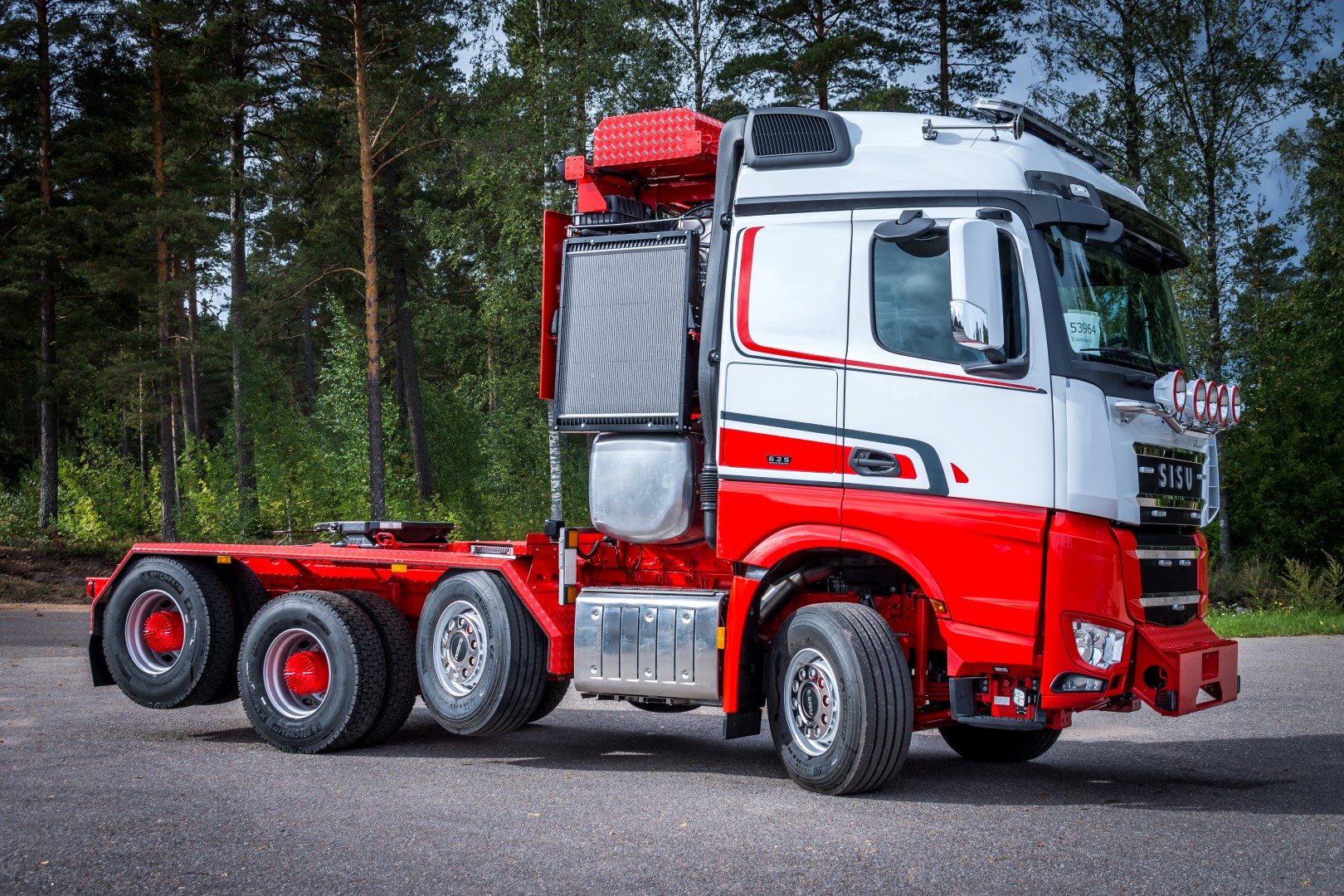 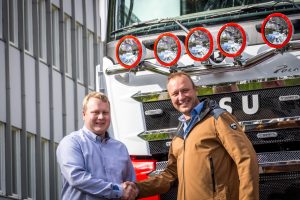 The new technical features of the truck include, for example, the axle weigh adjustment for the liftable 2nd front axle, the reinforced draw- and push points in rear and in front, as well as the additional cooler for the engine and for the fluid coupling. The additional cooling is necessary when operating with exceptionally heavy combination weights, in connection with low driving speeds. Hydraulics and electrics are in line with the requirements for the trailers used in special transports. SISU Polar Hauler comes with variable displacement hydraulics, which is used for special transport trailers’ suspension and steering, as well as operating the vehicles’ additional water pump and hydraulic fan.

The new Hauler supplements the selection of factory-ready SISU heavy tractors to cover also the toughest and the most demanding special transport tasks. “This is our first truck which can be taken straight to work. We at Vuorsola are especially pleased also about the top-class quality of this new product”, says Mr. Mikko Vuorsola.

Pictures of the truck can be found here 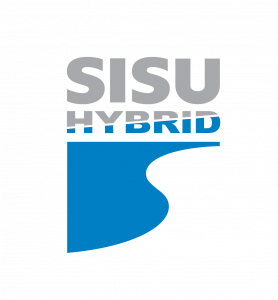 Sales of SISU Polar Hybrid series has got a good start, and now the first SISU Hybrid trucks are already rolling out from the Sisu Auto’s production line. The time when the Customers can take the new technology to productive use, and benefit from the advantages of the Hybrid driveline, has come. ”Every tenth of the SISU Polar Rock and SISU Polar Timber series trucks sold earlier this year have been chosen with the new Hybrid driveline solution. Thereby, these new powerful trucks shall be a common sight all around Finland during this autumn” says Sisu Auto’s Business Director, Mr. Petri Kananen.

The first generation of SISU Hybrid driveline produces a total power of more than 600 kW in parallel with the diesel engine. Torque of more than 3000 Nm is available already from the idle speed of the diesel engine, and the maximum torque of 3600 Nm in range of 1000…1800 rpm respectively. This unprecedented torque range and maximum power supplied by the parallel hybrid system increase the usability of the truck. Storing and re-using the braking energy in accelerations and hill climbing improves significantly the fuel economy of the heavy vehicle, at the same time lowering the CO2 emissions.

SISU Polar Hybrid differs from the conventional trucks with Sisu PowerControl control panel and with separate PowerTouch switch, which has been ergonomically placed in connection with the gear selector. Energy storage, the super capacitors, are located behind the cab. The energy storage does neither limit the cargo space, nor does it come in conflict with other components, or accessories. The hybrid driveline system enables, for example, start-offs without loading the clutch, as well as quick joggling and retarding functions. The hybrid system includes also an advanced start function, which can be used to start the diesel engine by the electric motor whilst the energy stored in super capacitors is in use.

Oy Sisu Auto Ab welcomes everyone to the exhibitions as mentioned above to see the future of heavy duty trucks. At Sisu Auto’s stand also the world’s fastest timber transport entrepreneur, Mr. Jari Halinen, shall tell more about his experiences of the totally new feeling of Power and Torque.

Photos of the SISU Polar Hybrid can be found HERE 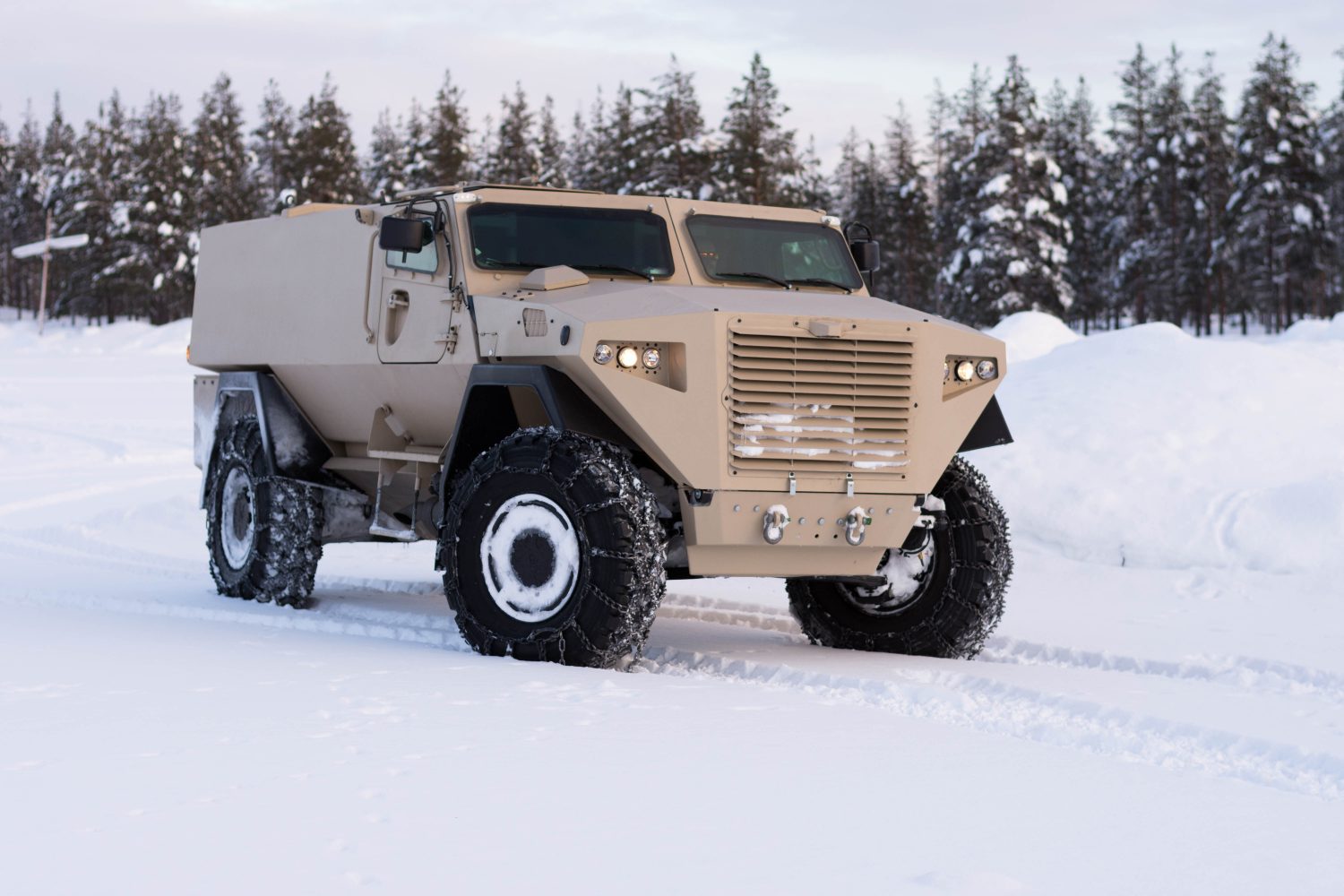 Sisu Auto is a long standing supplier of armoured military trucks, and special vehicles. In early 1980’s Sisu Auto introduced an armoured personnel carrier, SISU Pasi, which still today is in operational use with numerous forces. In spite of the robust design and operational efficiency, the aging Pasi fleets are slowly reaching the end of their planned life-cycle. As an answer, Sisu Auto introduces a modern, modular armoured vehicle with performance exceeding the standard set by the predecessors, SISU GTP.

The vehicle is equipped with independent suspension system and differential locks in each wheel, providing SISU GTP with mobility characteristics that are necessary beyond the paved roads, in severe off-road terrain, whatever the operational environment might be. Payload of the vehicle in off-road conditions is, subject to the chosen protection level, up to 4500 kg.

Sisu Auto has gained expertise of armouring solutions during the long history of armoured vehicle deliveries intended for the harshest operational duties. In addition to the vast number of SISU Pasi vehicles, armoured SISU 8×8 trucks are also field proven, serving currently in UN led operation in Lebanon, and already earlier in NATO led operation in Afghanistan. The crew survivability of SISU GTP is based on this expertise and knowledge. Modular vehicle structure allows operational-specific protection solutions: Protection level can be increased with an additional add-on kit or replacement components as necessary.

With the new SISU GTP, Sisu Auto is ready to respond when Mobility, Versatility and Survivability are operational requirements, and suitable vehicle solution is called for.

Pictures can be found here 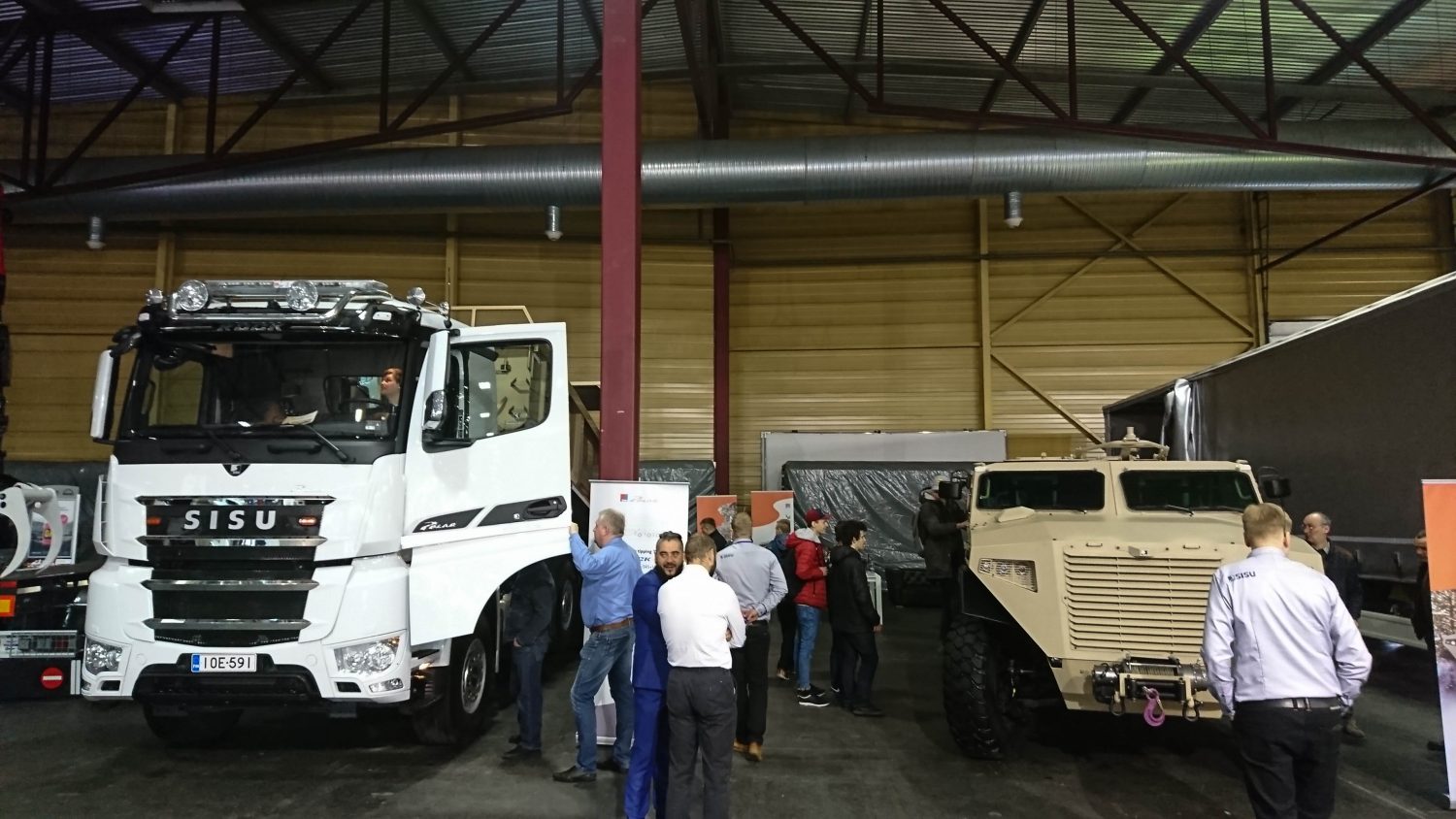 Oy Sisu Auto Ab and VV Line have agreed about Sisu Polar truck sales and aftersales in Latvia. VV Line has a strong background and expertise in heavy transport equipment which certainly creates a good starting point for the dealership. At the same time Sisu offers a wide variety of products meant for the most demanding transport tasks, covering e.g. earthmoving, winter road maintenance, heavy haulage and raw timber transport. Sisu Polar trucks are Finnish made factory-ready products which come with international warranty and product support by the manufacturer. These key factors together with newly established co-operation are for sure something that is necessary to produce results in Sisu Polar sales in Latvia.

Pictures can be found here

SISU will introduce a brand new armoured vehicle at AUTO 2018 motor show in Riga, 6-8 April. See you there! 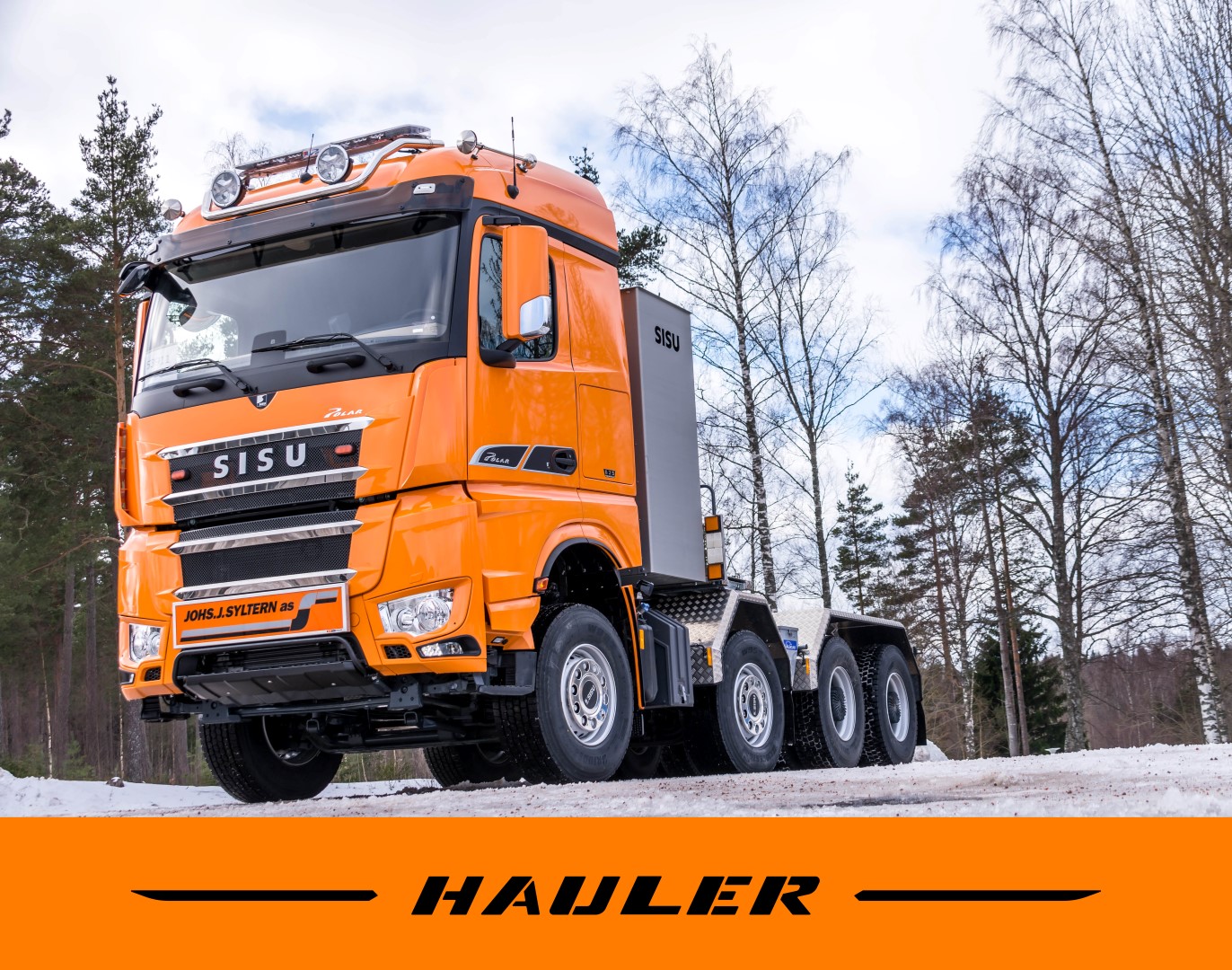 Sisu Auto focuses on providing solutions for the toughest transport tasks. Again, this results in new technology as a precise answer to Customer requirement. Johs J. Syltern As from Norway has received a delivery of new SISU Polar Hauler heavy-duty tractor that is equipped with the new liftable and steerable 2nd axle, which is rated for 10 ton load. This new axle configuration allows higher gross weights, and more even load distribution between the axles. The maximum allowed axle weights of this truck are 10 t + 10 t + 16 t +16 t without speed reductions. The liftable 2nd axle together with the drive disconnect and lift feature of the 2nd bogie axle lessens the vehicles’ fuel consumption, and have also positive effect on trucks’ manoeuvrability in challenging Nordic conditions. 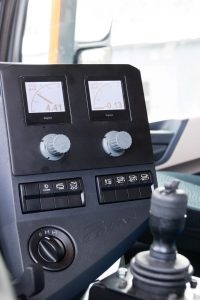 In addition to the new 2nd axle, the SISU Polar Hauler tractor delivered to Johs J. Syltern As is furnished with readiness for an add-on 5th axle. Based on Customer requirement, in trucks’ cabin there is adjustment knobs for stepless tuning of the suspension pressures for both the 2nd, and for the 5th axles. Thanks to the stepless pressure adjustment, the truck always has an optimal weight distribution between the axles.

The Nordic mountainous terrain has been taken into account with a separate oil pump for the front differential gear.  Additionally, the truck is equipped with, for example, an extra slim adjustable 5th wheel rated for 36 ton, with a sanding gear, and with variable displacement hydraulics meant for use of platforms and tipper trailers. The Customer specific solutions and tailored accessories enable the versatility of the factory-ready truck. 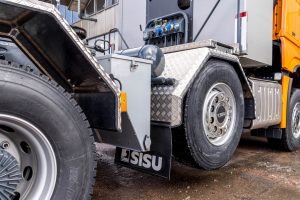 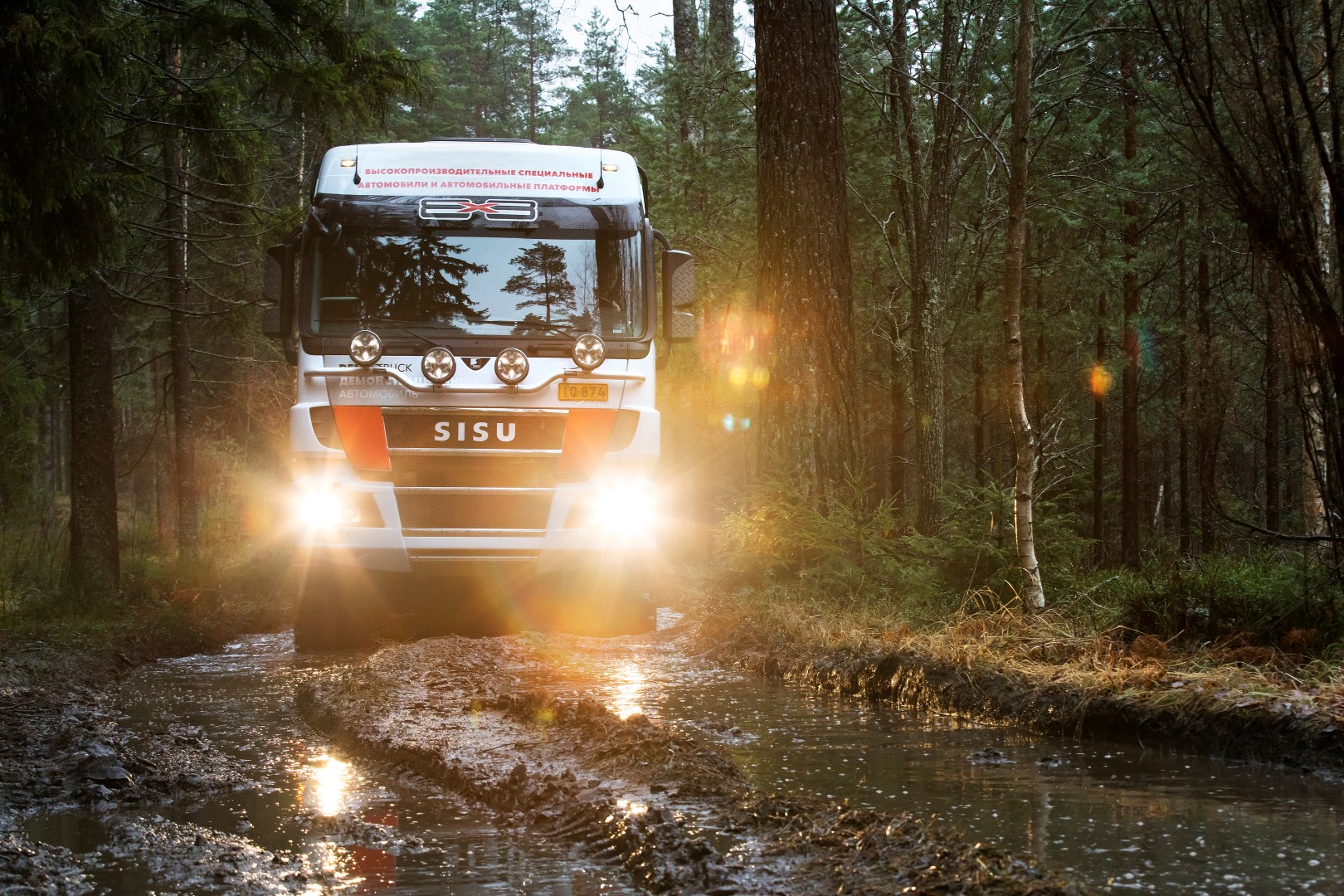 Oy Sisu Auto and Vantage Commerce Pte. Ltd. have entered into a contract for delivery of heavy-duty vehicles to Russia. Value of the contract is approx 1,5 M€.

Earlier, late in previous decade, Sisu Auto supplied gravel trucks and timber trucks to Ust-Ilimsk in Russia, for rough conditions. Majority of those trucks are still today in daily use, in spite of the 24/7 operation with heavy loads in the most demanding arctic conditions for almost ten years already. Now the deliveries of trucks meant for the challenging end use and rough conditions continue: We have signed a contract for supply of Sisu Polar 8×8 and Sisu Polar 8×4 vehicles to arctic Yakutsk region, for operating in varying end uses in ore transport and heavy trailer haulage, Says Managing Director Mr. Timo Korhonen of Sisu Auto. 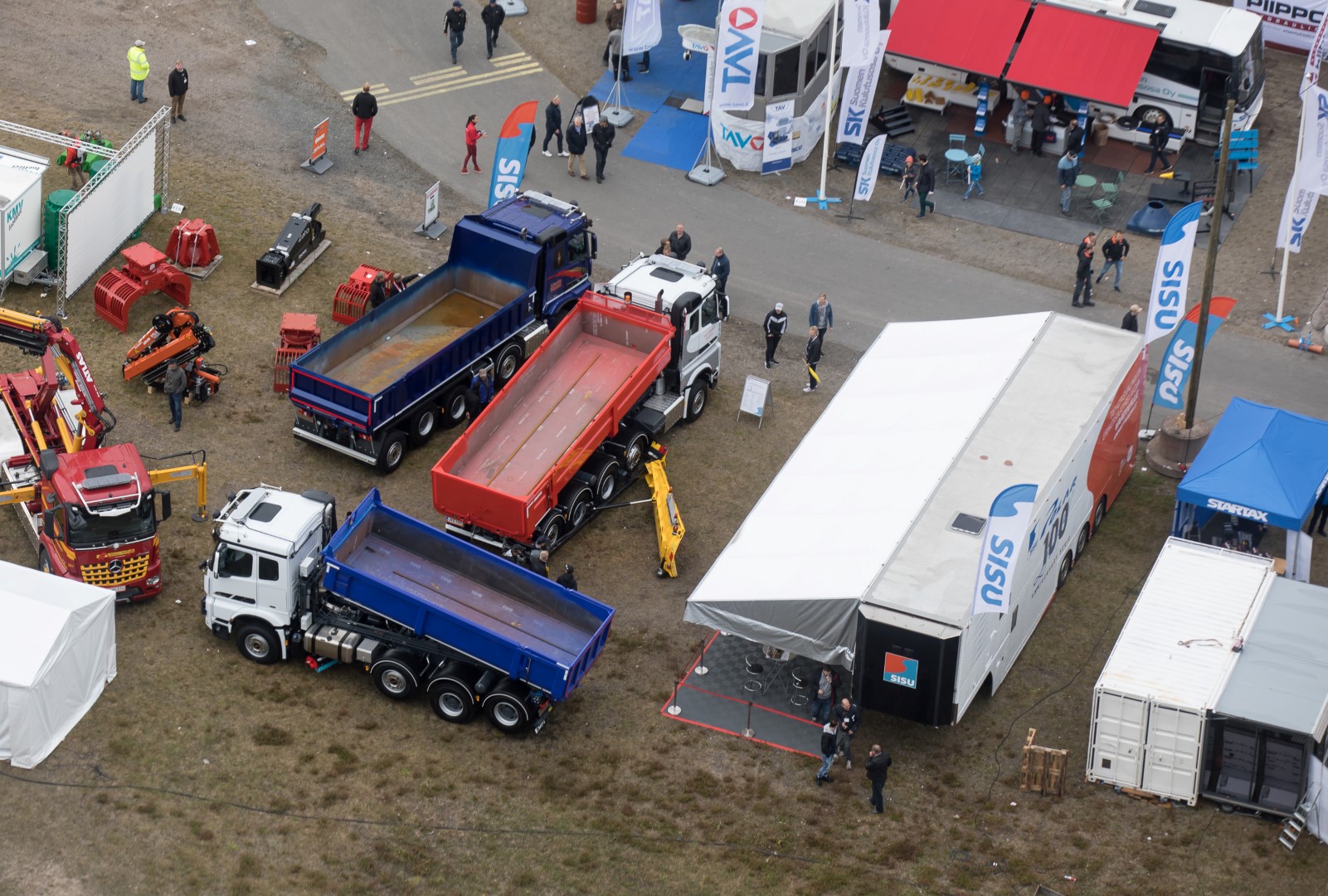 Maxpo 2017 has come to its conclusion finalizing the biggest transport industry exhibitions of the year 2017 in Finland.
Sisu Polar team would like to thank all Maxpo guests. The weather conditions was not favourable but it did not slow down the action.

Thanks for visiting us at Maxpo exhibiton. Hope to see you again at Maxpo in 2019! 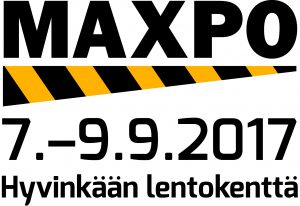 Maxpo is the largest exhibition of land construction and environmental maintenance machines in Finland. Maxpo is organised at the Hyvinkää Airfield about 60 km from Helsinki. In addition to great machines, Maxpo offers a lot of interesting program.

At our stand B170 you will find the most efficient solutions for gravel transports, earth moving and road maintenace. At Maxpo we present a completely new 5-axle complete road maintenance vehicle. Our new road maintenance truck model follows the promises of the Sisu Polar range: Functionality, Economics and Efficiency.